Understanding underlay can help you produce better embroidery. By learning about it’s function and attributes, you’ll have a better idea of whether a particular design is suitable for your target fabric.

First, we should start off by defining what exactly is underlay? Underlay acts like a skeleton in an embroidery design. These stitches are laid down before the upper decorative stitches and are much lighter in coverage.

Just as the bones of your skeleton provide support for your body, so does underlay support a design; it is the foundation of a design and provides stability to maintain design integrity.

I also like to think of underlay like underwear; not only does it smooth out unwanted ripples but it can provide lift in key areas!

You may also hear underlay referred to as understitching or underlayers.

The two primary purposes of underlay are to:

You can think of underlay as a method of initially basting the fabric to the stabilizer. In the illustration below, the blue stitching is the underlay and the red is the top stitching. Normally the underlay is sewn in the same color as the cover stitching. The rectangle on the left has a fill underlay while the satin column on the right has a zigzag underlay.

A common way to do that is with what digitizers call an edge walk. This is nothing more than a simple “outline” of the design set within the edges of the top stitching. On very small objects, it may simply be a line of running stitches up the center, also called a center walk.

On larger areas, this edge walk is followed (or may be preceded) by a light fill or zigzag as required by the fabric. In extreme cases, this light fill will be replaced with a mesh or grid of stitches.

The latter is often done on designs digitized for textured fabric like corduroy or terry cloth; you are unlikely to find this type of underlay in a stock design.

In this respect, underlay reduces fabric shifting during the sewing process, thereby also reducing puckering. Proper selection and use of underlay reduces the push and pull distortion resulting from machine thread tensions.

By attaching the fabric to an appropriate stabilizer, the fabric—even very unstable ones—acquires the stability qualities of the backing used. In extreme cases, it might be the underlay that is the sole support of the embroidery with fabric simply going along for the ride.

Underlay supports the top stitching by maintaining a crisp, well-defined edge between abutting areas of stitches. Underlay also prevents stitches from sinking into the fabric. Highly textured fabrics like terry cloth towels can benefit from a light “net” of underlay to hold down the nap and provide a smooth even surface for later stitches.

Digitizers also employ underlay creatively to add additional loft to some sections of embroidery to add interest, depth, and realism. They may also intentionally delete underlay to

WHAT IF UNDERLAY IS REMOVED?

Unless you know what you are doing, I highly recommend not removing underlay. Worst case—think free-standing lace—your entire design will just disintegrate into a wad of thread once the stabilizer is removed.

Most often, you will have varying ranges of lower quality embroidery depending on a variety of factors. Design, fabric, and stabilizer choices along with hooping techniques will have the most influence.

I have heard educators recommending the removal of underlay to reduce design thickness, stitch count, and sewing time. However, unless you are sewing on a “non-fabric”—leather, unbacked vinyl, wood, metal, paper—where needle penetrations actually puncture the material and leave a hole, this is rarely wise on a professionally digitized design.

Experienced, professional digitizers know that more underlay is not necessarily better and that it should be precisely, concisely, and strategically placed. If the underlay in your design appears random or scribbled, I’d question the quality of the design.

WHEN IS UNDERLAY NOT REQUIRED?

Underlay is unnecessary on designs that is solely composed of running-type stitches such as redwork and quilting design. Running stitches don’t cause as much fabric and design distortion as fills and satins. Even if you wanted underlay, there would be no way to hide it.

However, you can use your machine’s basting function to add some initial stitching around the perimeter of the design to attach your fabric to the stabilizer.

Underlay can also be detrimental on items that perforate easily, as mentioned previously with the “non-fabrics.”

WHEN TO ADD MORE UNDERLAY

If you are sewing on a lofty, textured fabrics like terry cloth or corduroy, you may need to add more underlay. If you are working with a stock design that is not a native object file in your software, this is often not a trivial procedure.

On the other hand if you created the design yourself in your digitizing software or lettering program or if you have the original design and it was created in the same software you have it may be as simple as altering a few stitch attribute settings. Adding underlay is beyond the scope of this article, I just wanted to point out that it may be necessary and can be done.

Underlay has a definite purpose. In this post I’ve only provided an overview of underlay and what you need to know as an embroiderer. Before modifying any underlay, examine if on screen and perform a test sew.

If you do modify, be sure to only work on a copy of the original design. Consider that underlay in stock designs is targeted for “average fabric” and may not be optimal for your project. Optimizing underlay is most useful in production environments and only you can decide if it is worth the extra time and effort.

If this whetted you appetite and you’d like to know more about how a design is constructed so that you can maximize your results, I’ve written an 106-page ebook called Anatomy of a Design: How to Think Like a Digitizer and Become a Better Embroiderer that will teach you how a digitizer looks at designs. 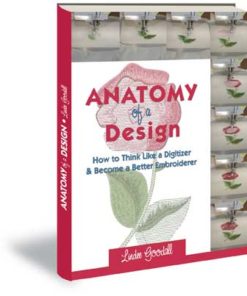 Anatomy of a Design: How to Think Like a Digitizer 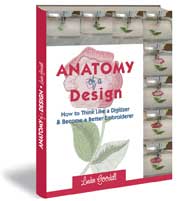 Sample Chapter from Anatomy of a Design

Lindee Goodall is a veteran master digitizer who's won awards for her beautiful designs, been a guest on numerous PBS sewing shows, written articles for a variety of home and industry-related magazines, and is a Craftsy instructor. Lindee G Embroidery is her second company, following Cactus Punch, which was founded in 1994.

You tip your hairdresser and restaurant wait staff, consider tipping us!